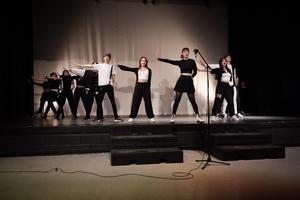 “This competition means so much to this group as they have been interested in show choir since elementary school when they saw our national championship team perform,” shared Anne-Marie Kane, music teacher at OLOL and coach of the group. “They have been ready to compete and were hungry to perform their set. They are a very competitive group and have worked very hard for this chance.”

The OLOL Show Choir Team has competed in this event four times, claiming National Championships once before. This time around, the team placed second out of a tough spread of 16 teams. To prepare for the competition, the team practiced multiple times a week since learning about the competition in November 2021.

“We prepared for this by practicing a few times a week and enlisted the help of Dustin Jodway from Red Tree Academy who is a performance coach, to really give the set some polish. Initially, we had a lot of students who were interested, so we divided the team into two teams, one competitive and one noncompetitive for those beginners who are just trying to learn what to do,” shared Kane.

16 students performed in the virtual competition this year on the competitive team, consisting of mostly grade 11 and 12's with one grade 10. The team scheduled out a performance time, during which they needed to be connected to a Teams call with the competition organizers. At the same time, the group was recorded both through video and audio separately. They then sent all the various pieces together to assemble for a final production that will be shown this weekend where the team will find out how they have placed.

“These kinds of competitions can be difficult because the judges are always different, and though the criteria is the same, the interpretation of what they're looking for can change from year to year,” Kane said. “There are teams competing from all over Canada, and there are some groups that are starting to come up from the United States as well, turning it into an international competition. Hopefully these activities will continue to grow in popularity.”